A rather interesting gemstone that has been a very popular choice, particularly in dress jewellery is Amber. However it isn’t a stone at all, it is in fact fossilized resin which is a natural substance that comes from trees. 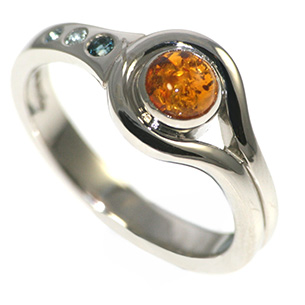 Amber is most commonly found in golden yellow to orange and can be transparent to translucent. However Amber has also known to be found in green, red, violet and black.

It is normally found in small nodules of irregular shapes which for jewellery proposes is most commonly polished and faceted into beads or cabochon cut.

Due to thy way in which Amber forms it means that it is a tough which makes it suitable for carving however it is a very soft material and scratches easily hence why it measures only 2 ½ on the Mohs hardness scale. It is said that when amber is rubbed it produces a negative electrical charge which attracts dust.

Throughout history it has been used for a number of medicinal uses, for example it is necklaces made from Baltic amber have traditionally been worn by young children in Europe's mainland as a remedy for teething pain, and these are now gaining popularity over here in Britain. These are not for the child to actually chew on - they work by being worn touching the skin and the heat of this releases a tiny tiny amount of oil which is then absorbed into the skin. Baltic amber is different from other amber because it contains succinic acid. Succinic acid is a naturally occurring acid in every cell of the human body and has many functions including inflammation relief.