Emerald, Aquamarine, Morganite are all composed of Beryllim aluminium silicate making them part of the Beryl family of gemstones and they each have a hardness of 7 ½ on the Mohs scale. Each type of stone can be cut into the various forms of faceted cuts and cabochon cuts. All three gemstones have a vitreous lusture, meaning that they shine like glass.

The main difference between the stones are their colour but also their transparency and clarity. Emerald is the least transparent of the three stones and also tends to have the most inclusions, however it’s rarity and uniqueness of colour makes it the most valuable of this family of stones.

Each stones has a hardness of 7 ½ on the Mohs scale. Despite this Emeralds are very brittle and are prone to breakage due to their tendency to have many inclusions which weaken the stone significantly (99% of Emeralds have inclsuions in them). The stone is prone to chipping. Good quality Aquamarine and Morganite without many inclusions benefit from good hardness and durability and are very suitable for everyday wear without the high chance of breakage found in Emerald.

The emerald cut is considered the best cut for an Emerald hence the meaning behind the name of this cut. The cut helps to protect the stone against chipping. With Aquamarine and Morganite a good quality cut is often helpful in making the most of their subtle colours. 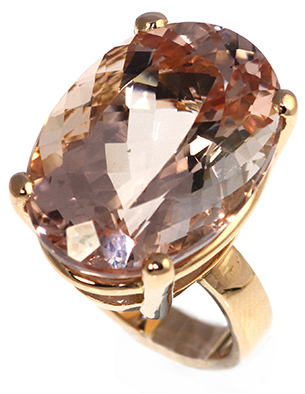 With Emerald engagement ring it is important to remember their brittle nature and their tendency towards chipping. It can help to imagine emerald as being as brittle as your finger nail, and that with an Emerald breakage is not a matter of if but when.

There are alternative green stones which can be used instead of an Emerald such as: Tourmaline, Tsavorite, green Sapphire or Peridot.

Some customers looking for a slightly stronger blue than Aquamarine for their engagement ring might consider Blue topaz which comes in three colours: Swiss, London and Sky blue. Blue Sapphire and blue Zircon are other options for blue engagement rings.

There are several differences between Aquamarine and Topaz. Topaz is slightly harder with an 8 on the Mohs scale. The blue colour can be found naturally in rare forms but it can also be created by heat-treating colourless stones. Aquamarine is weakly refractive whereas Topaz is doubly refractive. Topaz is much less expensive than Aquamarine, and generally a deeper blue in colour although it is possible to create Aquamarine-like colours in a Topaz. Topaz is often the alternative stone for customers who wish for a less costly alternative to Aquamarine.

Other alternatives to Morganite which show a stronger pink colour might be pink Sapphire, Tourmaline, Ruby or rare pink Spinel.

Stones from the Beryl family offer a lovely selection of colours to include in engagement rings and the variety of shades, cuts and sizes can work with a huge range of design options.

Laurie is a Senior Designer based in our Hertfordshire Jewellery Centre, has an MA from the Royal College of Art and specialises in ethical design