Eternity rings are usually given as a gift from husband to wife on a special occasion. Often the birth of a first child, a memorable anniversary, vow renewals or just as a special gift to remind themselves of the love they share throughout the hustle and bustle of 21st century life!

Throughout history these symbols have been given in many different ways, shapes and forms. The first examples of these are dated back approximately 4000 years. Attributed to the Ancient Egyptians, the earliest examples were found to be made of rope. As the sophistication of materials and tools progressed metal was used. Findings from this time usually symbolise, Ouroborus, the snake eating it’s own tail, this reflects the cyclicality of the eternity of love.

More recently, In the 1960’s a diamond merchant representing American company De Beers did a slightly dodgy deal with the Soviet Union. This secret trade agreement led to De Beers purchasing a vast quantity of Russian diamonds. Due to the small sizes of these diamonds they had to come up with a way of using these, in a way that would sell. This led to them ‘re-inventing’ the eternity ring, almost claiming it as their own invention. A huge advertising campaign stated “She married you for richer or poorer, Let her know how it’s going” in order for them to shift the stockpile of small diamonds they had acquired!
Nowadays the Eternity ring comes in many forms, dependant on personal taste, matching to wedding and engagement rings and of course, budget. Diamonds are not compulsory and the gemstones, where previously have been set continuously around rings, can now cover half of the ring (for comfort and practicality) or can be just a few beautifully coloured stones scattered all the way around.

When considering the purchase of an eternity ring it is important to take into account other jewellery that the recipient wears on a daily basis (it is always nice to incorporate a complimentary style where possible to show just how thoughtful you gent’s are!). It may also be worth remembering that finger sizes change throughout a person’s life, this ring is for eternity and so you may need to consider the half-eternity style ring to enable re-sizing where necessary.

Christmas is a wonderful time for someone to receive an eternity ring. Everybody gets stuck with ideas for that special gift and this can really win brownie points too! A thoughtful gift, maybe where each stone symbolizes a child, a year, or even a decade! Why not add a secret message engraved on the inside of the ring for your loved ones eyes only. 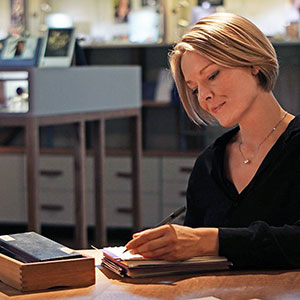