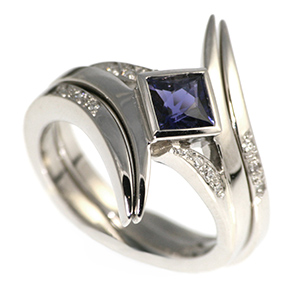 Top quality iolite rivals the best Tanzanite in both colour and saturation. If mixed with blue Sapphire and purple Tanzanite it is very hard to distinguish. The most desirable is the blue-violet coloured crystals.

The name derives from the Greek word ‘violet’ and sometimes the term water sapphire or lynx sapphire are used to glorify the gemstone by traders.

Iolite is rarely seen in jewellery, but is gradually gaining popularity within the jewellery market. It is a transparent gemstone that can be found in dark violet-blue, light grey-blue, yellowish grey, green and brown. Blue iolite are very easily available, as well as violet-blue. However the most intense violet-blue iolite are not produced in high volumes. Iolite has a glassy lustre, and is a fairly durable and has a slight brilliance to it. Although this is not particularly lively stone it is a trichroic stone, which means it shows different colours at different axis.

Low grade iolite is often included and is therefore cut as cabochons. Dark fibrous inclusions are the most common, but small platy hematite and goethite inclusions occur and create a reddish sheen or aventurescene. It is very rare to find large pieces of iolite free from inclusions.

Treatments to intensify this gemstone, lighten or remove inclusions have not been discovered as of yet.

The hardness of iolite makes it a very suitable gemstone to use in jewellery. It does have a distinct cleavage in one direction and a conchoidal fracture. This is something to be aware of when polishing or setting, as problems with chipping could occur. Iolite is neither heat sensitive nor harmed by chemicals. It is commonly facetted as a step up cut because this enhances the colour. To lighten darker shaded, stones are usually cut very shallow, slightly ‘windowed’. The pleochroic properities of iolite require accuate orientation of the gemstone when it is being cut.