Iolite is the transparent version of the mineral known as Cordierite which was named after the French geologist Cordier. Iolite itself comes from the Greek word ‘Ios’ which means violet. It is known for its indigo colours, and often has a lot of navy colour and can make a lovely choice for engagement rings, wedding rings and eternity rings. It is believed to be an excellent gemstone for detoxing (especially from alcohol!) It has a hardness of 7-7 ½ on the Mohs’ scale, with an orthorhombic crystal structure and vitreous lustre. They were quite popular in the 18th Century and are considered an unusual choice today – however some gemmologists are predicting a boom in their popularity and expect prices to rise in the future due to high demand. These stones supposedly can help improve your eyesight and can promote a friendly disposition and a curious outlook! 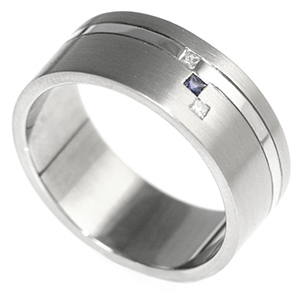 It has strong pleochroism, which can be seen without specialist equipment! It is known as dichroite, which is a Greek word which means ‘two-coloured rock’… however some people refer to it to having three colours! Some gemmologists refer to it as trichroic as its colour differs depending upon the axis e.g. a single stone may look grey-blue from one view, yellow on another view, and violet-bleu from another! The best colour can be seen down the length of the prismatic crystals, so it can be tricky to cut to optimise the colour on the correct axis. Iolite is also known as the ‘Viking’s Compass’ as they supposedly used it to help with navigation. By observing the sky through iolite slices, the Viking navigators were able to locate the exact position of the sun on overcast days. Iolite cancels out haze, mist, and clouds to make a clear view of the sun! This unusual feature makes it one of my personal favourites and an interesting addition to any engagement ring. It is often confused for sapphire and tanzanite, and can make a good alternative gemstone for them. In fact it is sometimes called a water sapphire and lynx sapphire!

They are usually sourced in pebble form from alluvial deposits usually, and are formed in metamorphic rocks (similar to garnet). It is often found in India, Madagascar, Brazil, The USA, Sri Lanka, Burma, Finland, Canada, Australia, Germany and Norway. They can be sourced in mixed, step and cabochon cuts and they do not have any treatments of enhance the gemstones and there are no synthetic or imitation stones available currently. Step cuts are often slightly hallowed to allow light into the stone more readily. Although you can source them in sizes of around a few carats they do have a tendency to be included and it can be quite difficult to find stones of a large size without them! Although they are fairly durable they do have a conchoidal cleavage and care needs to be taken to prevent chipping. They can be fairly sensitive, so avoid exposing them to chemicals, steamers, or ultrasonic machines. If you are looking to have an engagement ring designed with this lovely gemstone your designer should be able to advise you about its care and choose a design that suits both your style and the needs of the stone.