Opal is a kind of hydrated silica gel which comes in two varieties, these are: precious (gem quality iridescent stones) and common or ‘potch’ opals (usually opaque with no iridescence). It usually contains between 5-10% water, however this can be as high as 30%! It has an amazing play of colour caused by the diffraction of light in its closely packed silica spheres making it ideal for those of us that are a little indecisive about choosing an engagement ring colour! It has an amorphous crystal structure, a vitreous lustre and is often found as veins running through sedimentary and igneous rocks. It can form into stalagmites and stalactites and can replace organic material such as fossils, wood, bone and shell! They can be quite fragile with conchoidal fractures, the hardness of this stone ranges from 5 ½ to 6 ½ on the Mohs’ scale depending upon the stone itself. If your heart is set on this lovely gemstone be sure to choose a protective and secure design for your engagement ring or wedding ring. 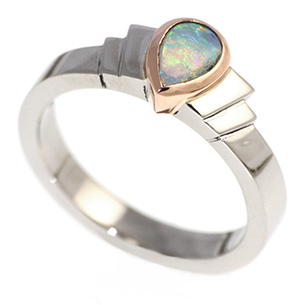 They are believed to have therapeutic qualities and are said to help improve a person’s eyesight. Opal is the national gemstone of Australia. This is of course where 97% of the world’s supplies come from too (which of course caused allot of worry when much of the country endured flooding recently). In The Middle Ages it was considered to bring good fortune as it possessed the virtues of each gemstone due to its play of many colours. Opal became associated with bad luck after a publication by Sir Walter Scott in which a character wears an opal pendant and soon after dies and within a year of its publication opal sales were cut in half! In Russia this gemstone is associated with the Evil Eye! Early merchants spread rumours that these gemstones were unlucky in an attempt to deter a reduction in sales of emeralds, rubies and sapphires which could have resulted in a stone which had all these colours in it!

Queen Elizabeth II owns the Andamooka Opal which sits in a palladium necklet and weighs 203 carats! The Hailey’s Comet opal is the largest uncut black opal in the world and is approximately the size of a man’s fist. Queen Victoria was a big fan of this stone and it became a very popular gemstone during the Art Nouveau movement and are often seen set into antique eternity rings. The Galaxy Opal is the world’s largest polished opal and has even been recognised by the Guinness world records and weighs 3,749 carats.

Opals can sometimes dehydrate over time and you can even occasionally immerse stones in water to restore them and some people store their opals in moist cotton balls to deter this. When designing with opals the backing and setting are very important considerations and some jewellers choose to maximise the iridescence of the gemstone with some kind of backing. If you are considering an opal when looking at engagement rings consider a diamond surround which can be a lovely and protective option. When choosing a gemstone it is believed that the better and more even the colour, the higher the value of the gemstone; be sure to rotate it 360 degrees and watch out for ‘dead patches’.

They are not usually found at surface level – they are found in ‘opal dirt’ which is usually found under a hard layer of sandstone. A mineshaft must be created to reach the levels of between two and twenty metres plus where the ‘opal dirt’ is found. Then horizontal layers are dug known as ‘drives’. This method often required heavy duty machinery. Opal mining tends to be done on a small scale though as it can be a risky venture with some sites yielding large amounts and others very few. They are sourced in Australia, Ethiopia, Japan, Peru, Indonesia, Brazil, USA, Honduras, Sri Lanka, Czechoslovakia, South Africa and Mexico. Opals can be step cut, cabochon and cameos and are often in freeform shapes, they can be sourced in sizes from around 3mm, however this depends upon the type of stone you are looking for.