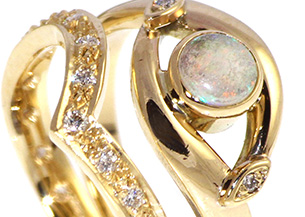 So, you have decided to opt for an opal for your engagement ring, eternity ring or wedding rings … the next question is; which type? Opals are such dazzling gemstones, however they are available in a vast variety of types and it can get a little confusing, if not a little overwhelming when you are trying to make that all-too important decision! To help you out with the big decision, here is a breakdown of the opal in all its glory!

Precious Black opal – This has a dark base colour and often has lovely blue and red flashes of colour. In terms of value the darker the background the higher the value of the stone. It is rarer than white opals so tends to have a higher carat price in comparison.

Precious White opal – This has a light base colour and strong colour play. They tend to have a lot of flashes of green. They usually look best in closed-backed bezel settings which maximise their iridescent qualities.

Precious Jelly Opal – This is also known as semi-black opal. It has a blue-grey base with an amber body colour which produces a blue-purple iridescence. They are good value for money, but it can be difficult to find a strong iridescent gemstone.

Fire Opal – This is a transparent and often facetted gemstone with yellow to red colours. Red is considered the most desirable variety. Fire opal tends to have less of a colour play than the other kinds of opal regularly used for pieces of jewellery.

Opal matrix – This is a banded growth with matrix inclusions. They are often complex pieces and can be quite expensive.

Boulder opal – This is a precious opal with a sandstone or ironstone base. It is often very thin so it has to be cut with matrix stone backing. This can make it a cheaper and more durable option. In fact these are often used in rings!

Crystal opal – This is a transparent and glasslike gemstone with a fantastic vibrant play of colours which can make it a costly option.

Harlequin opal – This is transparent to translucent with a mosaic-like effect. It is considered to be one of the most desirable types of opal.

Andean Opal – It has a bright turquoise colour and is usually opaque. It is often ‘fixed’ with a glue coating to help preserve the colour (which can apparently change with exposure to air!)

Ethiopian Opal – This has a golden honey body colour with a strong iridescent quality. It can be expensive and difficult to source and is quite a ‘new’ opal on the market.

Common Potch Opal – This is also known as Honey Opal. It has no colour play and is considered an inexpensive option which is often seen in bead form.

Common Prase Opal – This is a green due to the presence of nickel. It is usually cloudy in appearance and is often mistaken for Chrysopase.

Common Seascape Opal – This has a blue-green colour and often has dendritic inclusions.

There are also several imitation opals, which you should watch out for when choosing you engagement ring. The French manufacturer Gilson created an imitation stone which was laboratory made starting in 1973. This has a mosaic-like structure which makes it stand out as an imitation quite readily. Another famous imitation stone is known as the Slocum opal. This is a tough man-made glass imitation which has a silky flat colour. However when magnified the structure has a different texture and kind of crumpled appearance.

There are also several different types of glass imitations, polystyrene latex ‘opals’ (which have a milky blue sheen that makes them quite recognisable), as well as some imitations which are several different pieces that assemble together in a jigsaw-like pattern.

At Harriet Kelsall Bespoke Jewellery, we often source opals in doublet and triplet form. A doublet opal is made up of two pieces; a top piece of natural opal and a potch opal, glass of chalcedony base, which makes the gemstone more durable. A triplet is made up of three pieces and has an additional protective dome of rock crystal covering the opal top. These gemstones will have a greater level of protection and durability making them more suited to engagement rings and wedding rings. Be careful when wearing these stones on a daily basis though as you should never put doublets or triplets in water as it can cause permanent damage to the stone.