Alexandra and Dairmid wanted to commission a platinum eternity ring inspired by their children. During the design process the couple were expecting twins and just before the ring was engraved Alexandra gave birth to their beautiful new additions. The pentagonal profile band has several Mobius twists which created five flat surfaced resolutions. Alexandra has Ukrainian heritage so she wanted the name of each of their children to be engraved in Ukrainian on the outside of the ring. The twins arrived just in time to have their names and dates of birth engraved alongside their older brother Richard. 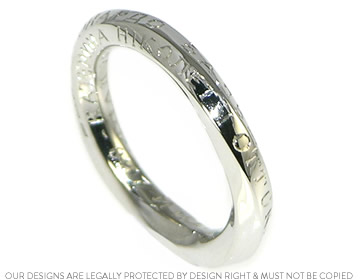